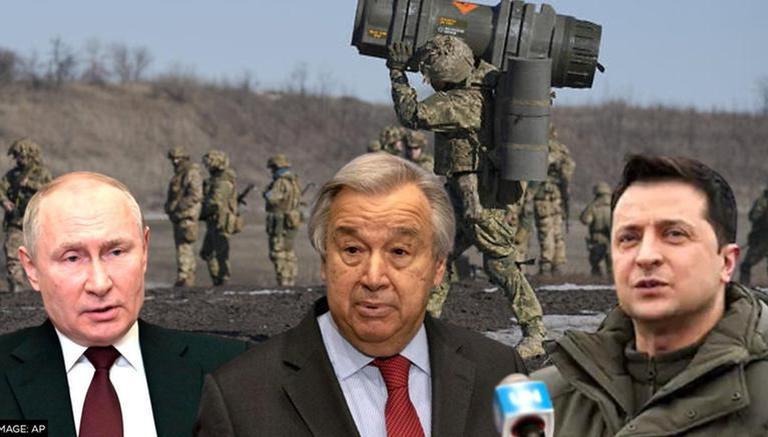 What role does the United Nations play in curtailing World War III while mediating the Moscow-Kiev crisis?

The United Nations was founded on October 24, 1945, also the day its Charter entered into force. As Russia and Ukraine are engaged in a full-scale war with intense weapon assaults, deadly bombings that have caused damage to civilian infrastructure and casualties on both sides for the fourth day, the role of the world body “United Nations” becomes extremely crucial. The United Nations, which was established after the devastating aftermath of World War II (WWII), maintains a neutral stance crucial to the maintenance of international peace and security through channels of dialogue and voting primarily under of Chapter VII of the Charter.

In Ukraine, @UN staff are on the ground, stepping up the provision of life-saving support, on both sides of the line of contact.

Their safety and freedom of movement must be guaranteed.

The protection of civilians must be the number one priority. pic.twitter.com/Svqxe8QAUB

Through the Security Council, the UN can determine the intensity of the threat posed by nations in conflict and the repercussions of acts of aggression on a global scale.

A Russian army soldier takes part in exercises at the Kadamovskiy shooting range in Rostov region, southern Russia. With tens of thousands of Russian troops positioned near Ukraine. Credit: AP

View from the cockpit of a Russian Su-30 fighter jet as it takes part in a training mission in Krasnodar region, Russia. Credit: AP

The UN, a mediator

The UN, essentially, acts as a mediator to prevent bilateral disputes, such as Russia’s military involvement in Ukraine, from escalating into a world war and helps nations negotiate when armed conflict breaks out, as well as to provide humanitarian aid to civilians suffering as a result of the damage resulting from these wars. The key role of the United Nations is “preventive diplomacy and mediation”.

The organization, in the event of a conflict such as Russia and Ukraine, which poses a threat to global security, deploys tools to bring participating nations on board, special envoys and political missions to accelerate the process of preventing conflicts, diplomacy and mediation between belligerents. nations, acting on the idea of ​​a liberal institutionalism where multilateral institutions should facilitate interstate cooperation and stop war.

How does the UN limit conflicts such as Russia-Ukraine; examples of past wars

The UN Security Council (UNSC) is the body that springs into action to maintain international peace and security in the event of an escalation of war between nations. This structure is made up of 15 members, including 5 permanent members, who also have a right of veto (the P5). The United States, United Kingdom, Russia, China and France have the right of veto to refuse a unanimous resolution. It is this right of veto that would prevent them from going directly to war because of their balance within the council related to security issues. Since the Cold War, even though hostilities may exist, it would be nearly impossible for the P5 to start a war directly between them.

Several UNSC resolutions can be adopted by the UN, which will support peace processes, resolve disputes, help the organization respond to illegitimate uses of force, coercion against each other. The UN will also go so far as to impose sanctions in situations where dialogue is weak and global security has been threatened.

Uruguayan peacekeepers from MONUSCO, whose mission was to protect commercial shipping against piracy and armed groups, are shown practicing a boarding exercise on Lake Tanganyika near Uvira, South Kivu, in the Democratic Republic of the Congo (2012). Credit: UN

The UN played a crucial role during the Bosnian War in 1993, when intense conflict erupted in central Bosnia between Bosniaks and Bosnian Croats which led to wartime atrocities against Serbs and Bosniaks, including the Ahmići massacre, April 16, 1993. NATO’s intervention in Bosnia and Herzegovina led to large-scale air operations and more than 60,000 troops in Operation Joint Endeavour.

The UN took strict measures to disembark the United Nations Protection Force (UNPROFOR) soldiers who went inside the war zone and monitored a ceasefire until peace negotiations are in place. The General Framework Agreement for Peace in Bosnia and Herzegovina was initialed with 11 associated annexes and the “peace agreement” was declared at the peace implementation conference in London which ended the conflict in 1995.

The withdrawal of UNPROFOR forces was complemented by the deployment of a NATO-led IFOR Multinational Implementation Force. All military decisions within the war-torn nations were then made by the UN IFOR military commander. A United Nations International Police Team (IPTF) has also been created.

Another crucial UN role can be drawn from the 2008 anti-piracy resolution (Mingst and Karns 2011:108) involving armed robbery off the coast of Somalia as it deployed naval vessels international and military aircraft in African sovereign waters. States cooperating with the country’s transitional government were deployed for a period of six months, international actors were able to enter Somalia’s territorial waters and use “all necessary means” under the provisions of international law to suppress armed attacks and thefts at sea.

The UN played the lead role, announcing that the measures would not restrict rights and obligations under the Law of the Sea Convention, while announcing that international military forces should ensure that their operation does not carry infringement of the right of innocent passage of vessels of a third State. . Such examples as we see in the conflict between Russia and Ukraine where commercial cargo ships from Turkey and Japan were bombed in the Black Sea. The General Assembly and other United Nations bodies, supported by the Office for Disarmament Affairs, also intervene when threats of nuclear weapons, weapons of mass destruction are involved and violate conventional arms treaty regulations. .