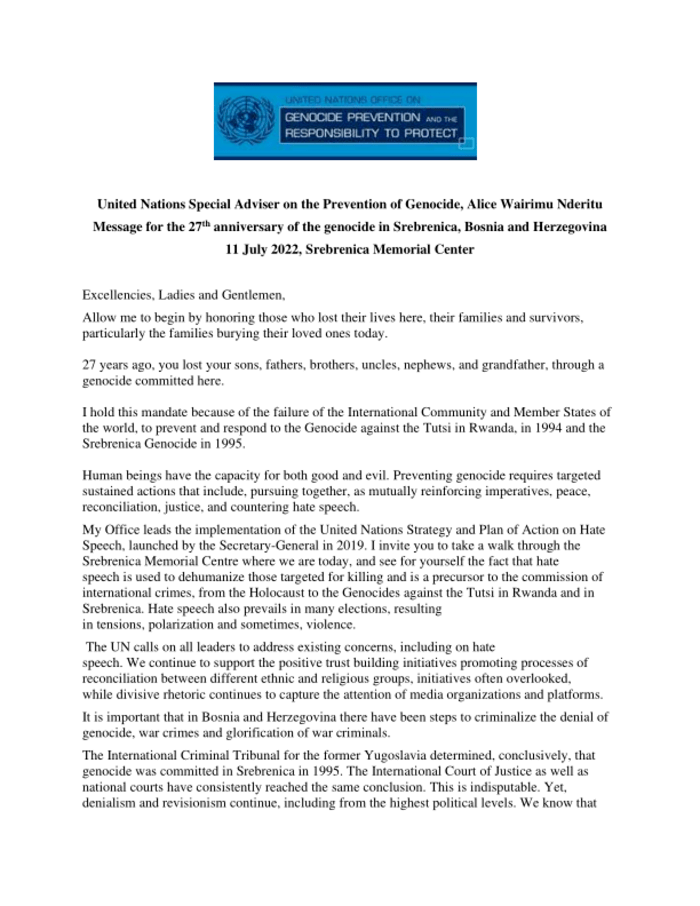 Let me start by paying tribute to those who lost their lives here, their families and their survivors, especially the families who are burying their loved ones today. 27 years ago, you lost your sons, fathers, brothers, uncles, nephews and grandfather to a genocide committed here.

I hold this mandate because of the failure of the international community and member states of the world to prevent and respond to the genocide against the Tutsi in Rwanda in 1994 and the genocide in Srebrenica in 1995.
Human beings have the capacity for both good and evil. Genocide prevention requires focused and sustained actions that include, pursuing together, as mutually reinforcing imperatives, peace, reconciliation, justice and countering hate speech.

My office leads the implementation of the United Nations Hate Speech Strategy and Action Plan, launched by the Secretary-General in 2019. I invite you to take a stroll through the Srebrenica Memorial Center where we stand today today and see for yourself the fact that hate speech is used to dehumanize those targeted for murder and is a precursor to the commission of international crimes, from the Holocaust to the genocides against the Tutsi in Rwanda and in Srebrenica. Hate speech is also prevalent in many elections, leading to tension, polarization and sometimes violence.
The UN calls on all leaders to address existing concerns, including on hate speech. We continue to support positive trust-building initiatives promoting reconciliation processes between different ethnic and religious groups, initiatives that are often overlooked, while divisive rhetoric continues to capture the attention of media organizations and platforms.

It is important that in Bosnia and Herzegovina steps have been taken to criminalize genocide denial, war crimes and the glorification of war criminals.

The International Criminal Tribunal for the former Yugoslavia has conclusively determined that genocide was committed in Srebrenica in 1995. The International Court of Justice as well as national courts have always come to the same conclusion. It is indisputable. Yet Holocaust denial and revisionism persist, including at the highest political level. We know that Holocaust denial and revisionism are not only painful, they are a direct obstacle to reconciliation. We also see this dangerous trend in other contexts.

That is why, on June 15, 2022, My Office is launching a new guidance document, the first of its kind for the United Nations, titled Combating the Holocaust and Genocide Denial: Protecting Survivors, Preserving Memory and Promoting prevention.

Accountability for atrocities is important not only to achieve justice for victims and to restore public confidence in justice and security institutions, but also to prevent future crimes. We must therefore continue to support the efforts of the Mothers of Srebrenica for justice and memorialization. The commitment and perseverance of these mothers, our heroines, in the search for their loved ones and in the work to bring the perpetrators to justice are decisive not only for this country, but also for international justice in the world.

Let me say something about education. Many people I met during my visit last year were concerned about the segregation of the education system in Bosnia and Herzegovina. This included textbook content and academic curriculum design. They were particularly concerned about children learning different versions of the past. Let’s think about the contradiction that children all over the world, including in my home country of Kenya, are hearing that a genocide happened in Srebrenica.

The education system in Bosnia and Herzegovina separates children, sows division, increases mistrust, hinders reconciliation and poses a long-term threat to stability and security. This perpetuates the idea that there are inherent differences between children. I consider it of paramount importance to promote more inclusive schools as a key element in building trust and reconciliation in the country. We know that Tibetans say that an uneducated child is like a bird without wings.

So today, on this painful day, I join you in honoring the victims who have been lost here to this heinous crime of genocide. We stand in solidarity with the victims, some of whom are still missing, with the survivors and their families. On this solemn day, we pay special tribute to the 50 buried victims.