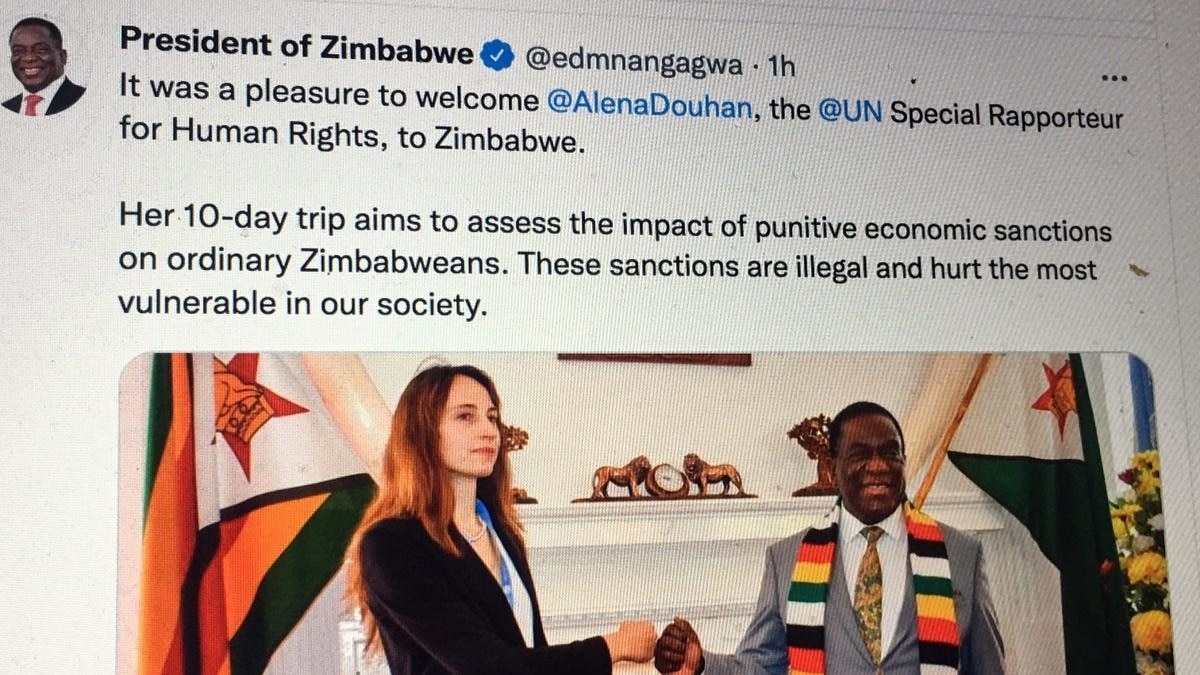 United Nations Special Envoy Alena Douhan, who is currently visiting Zimbabwe to assess the impact of targeted sanctions imposed on Zanu PF officials, held her first meeting in Harare today with President Emmerson Mnangagwa, in amid a government call for the demolition of the restrictive measures.

Douhan, UN special rapporteur on the negative impact of unilateral coercive measures on human rights and professor of international law, is also expected to hold a series of meetings with leaders of opposition parties, churches and organizations non-governmental and other stakeholders.

In a tweet, President Emmerson Mnangagwa said: â€œIt was a pleasure to welcome Alena Douhan, Special Rapporteur for Human Rights, to Zimbabwe. His 10-day trip aims to assess the impact of punitive economic sanctions on ordinary Zimbabweans. These sanctions are illegal and hurt the most vulnerable in our society. “

In a similar tweet, Information Secretary Nick Mangwana noted that â€œthere is no doubt about the deleterious impact of the sanctions on this country. Let’s all speak with one voice on #ZimSanctionsMustGo.

“Sanctions know no color or party to which you belong, so it is incumbent on all Zimbabweans to speak with one voice and call for the immediate removal of the sanctions.”

In a note on her Twitter page before leaving for Zimbabwe, Douhan wrote that she would be in Zimbabwe for a few days.

â€œA country visit to the RS on unilateral coercive measures in Zimbabwe is scheduled for October 18-28, 2021. I invite all interlocutors to provide relevant comments.

Some Zimbabweans, who have been following his visit closely, have responded to Mnangagwa’s tweet by calling for the removal of the targeted sanctions while others believe the ruling party is to blame for the restrictive measures.

One of them, identified as Nicole Hondo, said: “… We hope that Mrs Douhan will see with her own eyes how the illegal sanctions of the United States, Great Britain and the European Union have prevented Zimbabwe’s economy to its full potential and harmed ordinary citizens. “

But Arthur Zirabada reminded Zanu PF what it was doing during the liberation struggle.

He said: â€œDo you know that in 1978 ZANU sent Zvobgo to the United Nations to advocate for more sanctions and travel bans against the Smith regime? ZANU also urged the UN to condemn the rigged elections.

But Tanaka says Zimbabweans should solve their own problems without any foreign intervention.

â€œIt’s sad that human rights are an issue we have to take action on. We should learn to be progressive enough to improve and update our own conduct without the need for foreign delegations whose own nations often have poor human rights records. You have to improve Mr. President.

Farai Makomo, who is raging against the current situation in Zimbabwe, said:

The United States, Britain and other countries have imposed targeted sanctions on Zanu PF officials and some companies over allegations of electoral fraud and human rights violations.

Targeted U.S. sanctions only apply to 86 Zimbabwean individuals and 56 entities (mostly farms and legal entities owned by the 87 individuals) as of February 2020.

Follow These Tips Before Applying For A Bad Credit Loan Online