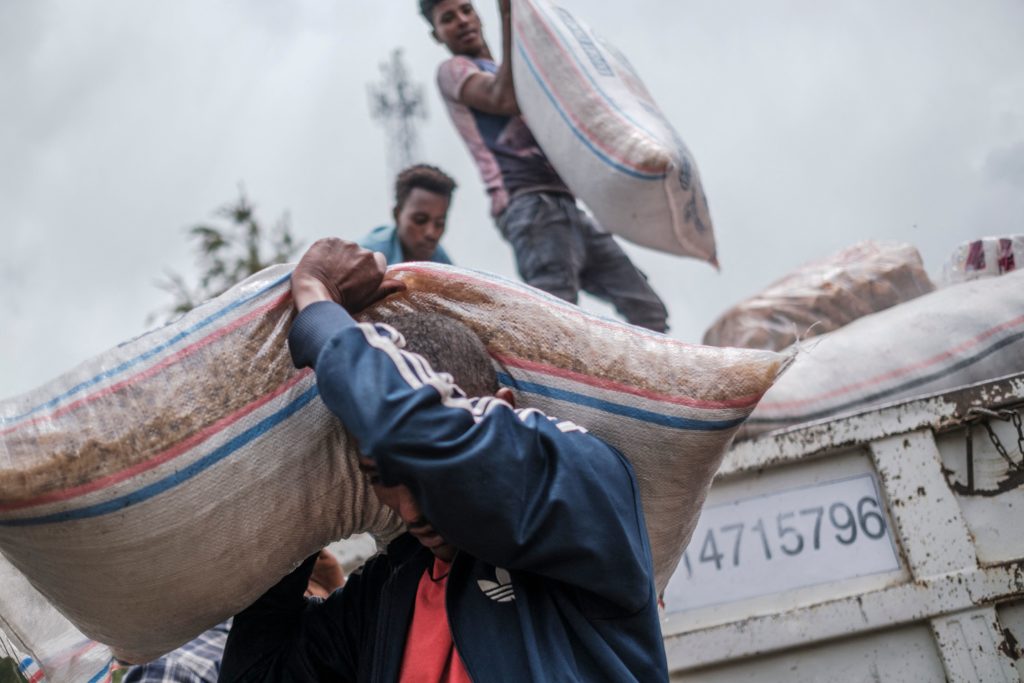 NAIROBI, Kenya (AP) – More than a third of people in Ethiopia’s beleaguered Tigray region “suffer from an extreme lack of food,” the United Nations World Food Program said in a new assessment of a region under government blockade for several months. .

“Families are exhausting all means to feed themselves, with three-quarters of the population using extreme coping strategies to survive,” the WFP said in its report released on Friday, noting an increase in begging and reliance on a one meal a day. He called on all warring parties in Ethiopia to agree to a humanitarian ceasefire and “officially agreed transport corridors” for aid after 15 months of war.

The UN said no aid convoys had entered the Tigray region of some 6 million people since mid-December. Separately, the UN humanitarian agency said less than 10 percent of needed supplies, including medicine and fuel, have entered Tigray since mid-July. All international NGOs operating in Tigray have run out of fuel, “with their staff delivering what few remaining humanitarian supplies and services on foot, whenever possible”, the agency said in its Friday update.

The Ethiopian government is reluctant to let aid fall into the hands of Tigray forces that once dominated the national government and have been battling the current government of Prime Minister Abiy Ahmed since November 2020. The government has partly blamed the problems of Insecurity in aid delivery, she said, is caused by Tigray forces, including renewed fighting in the neighboring Afar region, near the only road corridor approved for aid.

Aid workers, however, also blame bureaucratic hurdles, including intrusive personal searches and confiscation of items, including personal medicines, prior to visits to Tigray. The new WFP report, based on face-to-face interviews with more than 980 households in accessible parts of Tigray, cited “extraordinary operational challenges”.

Meanwhile, hunger grows. When asked if there was a famine in Tigray, WFP spokesman Tomson Phiri told reporters in Geneva that it had not been declared. But “we have people facing near-starvation conditions. … Famine and near-famine conditions? Different animals, but the same beast.

The war has changed in recent weeks, with Tigray forces retreating to their area after trying to advance on the capital, Addis Ababa, and the Ethiopian army declaring it will not pursue them further. This paved the way for new mediation efforts by the United States and the African Union, with humanitarian access a key objective.

Aid began reaching people in the Amhara and Afar regions after incursions by Tigray forces displaced hundreds of thousands of people. But the new WFP report says some 9 million people, the highest number since the war, need food assistance in the three affected regions.

Ethiopia’s foreign ministry said this week it was working with humanitarian partners to facilitate daily cargo flights to Tigray “to transport much-needed medicine and supplies”. It is unclear when the daily flights will begin, although the International Committee of the Red Cross said on Wednesday it had made its first delivery of medical supplies to Tigray since September, calling it “a huge relief”. A second flight followed on Thursday.

The UN has said that time is running out. “Humanitarian organizations have warned that operations could cease completely by the end of February in Tigray,” UN spokesman Stephane Dujarric told reporters on Thursday.

The Tigray health office reported this week that nearly 1,500 people died of malnutrition in just one part of the region during a four-month period last year, including more than 350 young children. He cited more than 5,000 blockade-related deaths from hunger and disease in the country’s highest official death toll ever associated with the war.

The Ethiopian government has sought to restrict reporting on the war and has detained some journalists under a state of emergency, including PA-accredited independent videographer Amir Aman Kiyaro. The country’s Council of Ministers this week proposed ending the state of emergency now, citing the evolving security situation. This requires the approval of lawmakers.