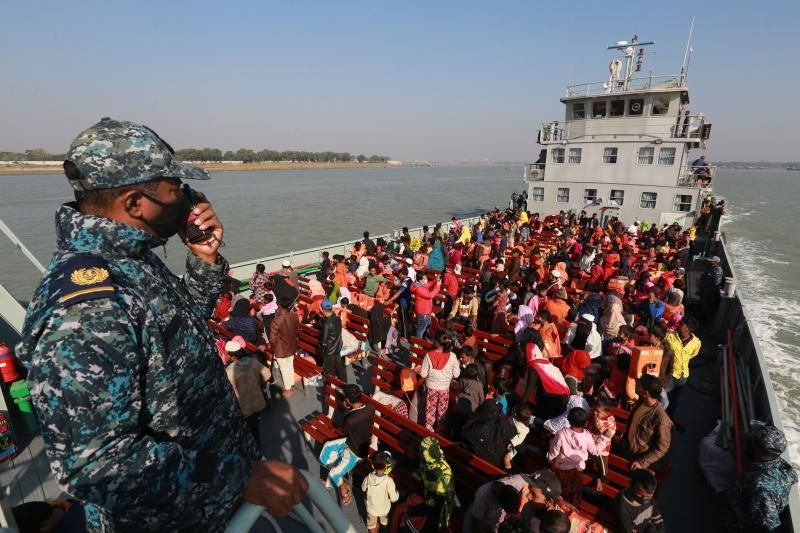 The Hague, July 22, 2022 (AFP): The United Nations’ highest court has ruled that a landmark case accusing military-ruled Myanmar of genocide against the Muslim Rohingya minority can go ahead.

The International Court of Justice (ICJ) in The Hague has dismissed all of Myanmar’s objections to a case brought by the West African nation of The Gambia in 2019.

The ruling paves the way for full court hearings into allegations of a bloody crackdown on the Rohingya in 2017 by Buddhist-majority Myanmar.

“The tribunal considers that it has jurisdiction (…) to hear the request filed by the Republic of The Gambia, and that the request is admissible,” said ICJ President Joan Donoghue.

Hundreds of thousands of members of the Rohingya minority fled the Southeast Asian country during the operation five years ago, bringing with them harrowing reports of murder, rape and arson.

About 850,000 Rohingya languish in camps in neighboring Bangladesh while another 600,000 Rohingya remain in Myanmar’s southwestern Rakhine state.

Gambia’s Justice Minister Dawda Jallow told reporters outside the court that he was “very happy that the court has done justice”.

Several dozen Rohingya activists protested outside the court as the judgment was read.

“This decision is a great moment for justice for the Rohingya, and for all Burmese,” said Tun Khin, president of the Burmese Rohingya Organization UK, referring to the country by its former name.

“We are happy that this historic genocide trial can finally begin in earnest.”

Myanmar’s representative, Attorney General Thida Oo, said her country was now “looking forward to finding the best way to protect our people and our country”.

The predominantly Muslim Gambia filed a lawsuit in November 2019, alleging that Myanmar’s treatment of the Rohingya violated the 1948 UN Genocide Convention.

Myanmar was originally represented at the ICJ by Nobel laureate Aung San Suu Kyi, but she was ousted as civilian leader in a coup last year and is now in custody .

Myanmar had argued on several grounds that the tribunal lacked jurisdiction in the matter and should dismiss the case while it was still in its preliminary stages.

But the judges unanimously rejected Myanmar’s argument that The Gambia was acting as an “agent” of the Organization of Islamic Cooperation of 57 countries in the case.

Only states, not organizations, are allowed to bring cases to the ICJ, which has adjudicated disputes between countries since just after World War II.

They also unanimously rejected Myanmar’s claims that The Gambia could not bring a case because it was not a direct party to the alleged genocide and that Myanmar had withdrawn from a relevant part of the convention. on the genocide.

Finally, they rejected by 15-1 Myanmar’s contention that there was no formal dispute at the time The Gambia filed the case, and therefore the tribunal lacked jurisdiction.

It could, however, take years for full hearings and a final judgment in the case.

“Action will be taken against the military, their brutality and cruelty. And that gives us hope for our suffering,” a Rohingya living in Myanmar’s northern Rakhine state told AFP. requested anonymity.

A Rohingya woman living in an IDP camp near Sittwe, the capital of Rakhine State, added: “It’s not only good for us (Rohingya) but also for the rest of the Burmese people who are suffering in the hands of the Burmese army”.

US Secretary of State Antony Blinken said in March that the Myanmar army’s violence against the Rohingya amounted to genocide.

The International Criminal Court, a war crimes tribunal based in The Hague, has also opened an investigation into the violence against the Rohingya. -AFP