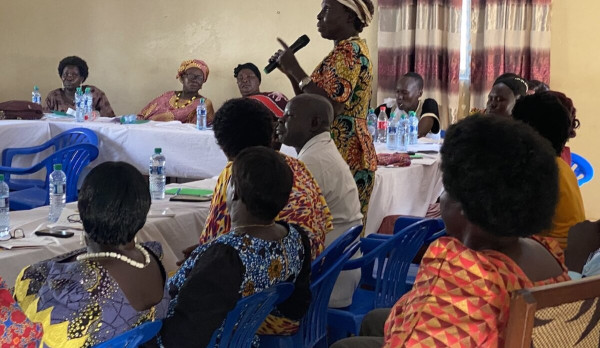 Hope filled the air in South Sudan, the world’s youngest nation, as parties to the conflict signed the Revitalized Peace Agreement to end the country’s ongoing civil wars.

The conditions that must now be met for the peace agreement to be fully implemented are not.

With little time left before the end of the current transition period with the holding of free, fair and credible elections, there is an urgent need to give new impetus to ongoing peace initiatives.

Lasting peace depends on the full and equal participation of women in the political life of the country.

The objective was to strengthen their lobbying capacities for the inclusion of women in leadership and governance roles.

“Many of our problems as women stem from entrenched patriarchal traditions and practices; Changing a nation’s culture and mindset takes time and is a daunting task, said Jennifer Nabongorika, Minister of State for Gender, Children and Social Welfare. “But as women leaders, we can’t give up,” she added.

Moderated by Edmund Yakani, Executive Director of Community Empowerment for Progress Organization (CEPO), and two representatives of the South Sudan Women Peace Monitoring and Advocacy Group, Theresa Siricio and Philister Baya, free and frank discussions between the 35 women representatives, for most drawn from the State Legislative Assembly, and five male gender champions, including the Assembly’s Chief Whip, were enlightening.

“Women – many of them at least – are excluded from leadership positions on the grounds that they lack capacity. Certain traditional beliefs and years of civil war, which have disproportionately affected women, are the root causes. Developing their abilities takes a long time; it is not a question of weeks or months, but requires a sustained commitment from everyone. However, this should not stop us from accelerating trainings and championing equal opportunities,” affirmed Peter Oting Carlo, Chief Whip, Eastern Equatoria State Legislative Assembly.

“Women constitute 50% of any society and respect for their rights is essential for the progress of any country.”

For Angela Achiro Onorio, a parliamentarian, if well supported, women can do anything their male counterparts can do.

“Most of the time, I am in my county raising awareness and mobilizing women to defend the right to actively participate in nation building,” she revealed.

“In my view, increasing the participation of women in security sector reform, in particular, is crucial.

Theresa Siricio, one of the discussion facilitators and chair of the South Sudan Women’s Peace Watch and Advocacy Group, shared some positive developments. “As we continue these outreach activities, we have seen a marked shift in attitudes and a growing appreciation for the insights brought by women in leadership positions. Our hope is that this positive trend trickles down to the grassroots as well,” she shared.

However, there is still much to do.

“We appreciate the nomination of 30 women out of 100 parliamentarians from various political parties to the Legislative Assembly of Eastern Equatoria State. This is an important step towards ensuring the full and equal participation of women in public life and service delivery at all levels,” said Caroline Waudo, Head of UNMISS Field Office in the state.

“However, the defense of women’s rights is not only limited to governance. Women and girls must be involved at every stage – within families, within communities – to shape decisions on issues that directly affect them.

The workshop, which was based on the landmark UN Security Council Resolution 1325 on Women, Peace and Security, successfully concluded with a number of useful recommendations, including strengthening partnerships to advancing microfinance for women-led projects, managing adult literacy programs. in all counties in Eastern Equatoria, using media partners to raise awareness of the gender equality provisions in the Peace Agreement and ensuring the presence of social workers in the counties.

↯↯↯Read more on the subject on TDPel Media ↯↯↯

United Nations led by traditional owners fighting to save the country