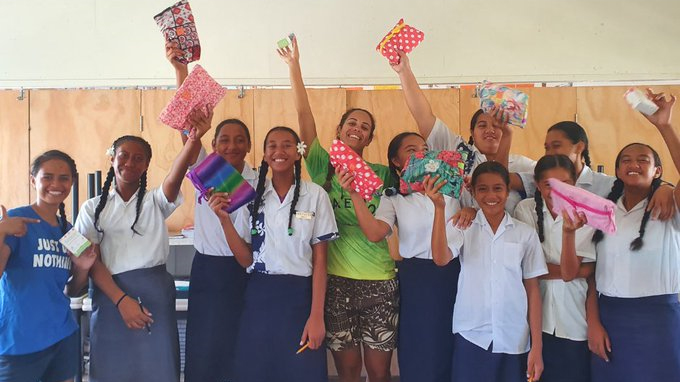 Te Ipukarea Society received a $ 22,000 grant from the United Nations in the Pacific to help women living in the Cook Islands who are struggling with menstrual poverty.

Menstrual poverty is inadequate access to safe and hygienic menstrual tools and education, which include, but are not limited to, sanitary products, washing facilities, and waste management options.

According to Alanna Smith, senior project director of the Te Ipukarea Society, it was luck that the organization discovered the grant which she said was an honor to receive for the first time.

â€œWe were fortunate to have been successful in securing the application from the Cook Islands Family and Welfare Association, which had shared it among their networks,â€ Smith said.

â€œIt was just a small grant that we applied for last year, and it was the first time we went through United Nations (UN) women.

“So it was really cool to be successful and get this grant for the first time.”

According to Smith, to be successful with the funding, Te Ipukarea Society’s request had to include how to reduce discrimination among women during Covid-19.

She said the group achieved this by combining it with an environmental perspective.

â€œIt was a little different because we needed a female component, and that was trying to reduce discrimination against women for schools.

â€œIt was by making products more accessible through reusable alternative solutions that our young women and women might never have heard of before.

â€œSo we were able to link that to our environmental perspective, given that some girls don’t go to school because they have their period and maybe they don’t have the products to handle it. “

To help close the menstrual poverty gap in the Cook Islands, the Society launched a series of workshops across the country earlier this year called Maine Mura: Girls with Dignity.

The aim of the workshops was to help alleviate some of the pressure associated with menstrual poverty while promoting sustainable ways to manage periods and reduce waste.

Two community workshops were held on each of the outer islands, one focused on schools, involving awareness campaigns and talking about moon cups and reusable napkins.

The other workshop focused on the wider community and older women.

Throughout both campaigns, Smith said they thought it was safer to divide the workshops because talking about rules is often seen as taboo.

“We thought it would be worth dividing it up so that the younger girls would feel more comfortable talking about these new things, because I think it’s still very taboo here in the Cook Islands to talk about the rules. .

During the workshops, the girls and women were given either a moon cup, which is a silicone bell that traps fluids and can be reused for 10 years, or a reusable tampon kit, which includes eight reusable tampons and a been provided by the United Nations.

People who attended the workshops were able to take the products home, test them out and provide feedback.

Smith said there was still an island and a campaign to be done.

â€œWe have another island to do which is Rarotonga, and we have been successful in getting funds through UNESCO to fund the campaign that will reach all high school and high school students here in Rarotonga.

â€œThese girls will have a little better luck because we have learned a lot from the Pa Enua campaigns and have been introduced to menstrual underwear. It is a new product that we will present and talk about a little more for the schools of Rarotonga.

According to Smith, the Te Ipukarea Society is currently working with a number of brands in New Zealand to test menstrual underwear and is awaiting instructions on how to use and care for it.

Once these trial products become available, the Company says it will screen a number of women in the community to try them out and provide feedback.

Smith did not say when the product would be ready for testing.

A number of other Pacific Island countries have also been successful in receiving a grant from the United Nations, but with different projects.