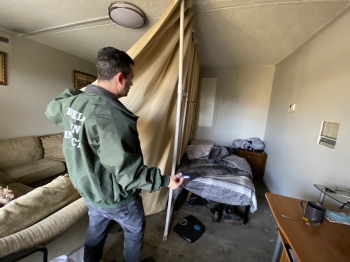 On Wednesday, March 9, 2022, a fire broke out inside a 7th floor apartment at 101 Kennedy Drive, resulting in several people being trapped and requiring the rescue of a 2-year-old child.

While the cause of the fire is still under investigation, an immediate inspection following the incident by the Rockland County Office of Buildings and Codes uncovered more than 100 violations, including :

Inspectors found 25 illegally converted apartments with living rooms and dining rooms turned into makeshift bedrooms, but that number could rise as at least 19 apartments were locked in the incident after inspectors couldn’t find them. to access.

None of the dwellings inspected had smoke alarms in each bedroom as required, and of all the smoke and carbon monoxide alarms tested, almost all failed, did not activate and were outdated. In addition, there was a systematic failure of the fire alarm system, without any audible or visual alarm sounding at the time of the fire.

“It is properties like Country Village Towers that underscore exactly why New York State directed my administration to assume full control of the Spring Valley Village Building Department. As a former first responder, I am outraged to know that this fire could have easily taken a turn for the worse, claiming who knows how many lives. It is critical that we see continued cooperation from the Village of Spring Valley to address these issues,” said county executive Ed Day.

Country Village Towers was last inspected in 2019 and 11 violations were found. The Village of Spring Valley did not re-inspect the property following this inspection to ensure the violations had been corrected and it appears that none of them ever were. Violations discovered in 2019 include electrical hazards throughout the building, apartment and stairwell doors not locking properly, no elevator inspections, and issues with smoke and fire alarms .

“One thing is certain as a result of this ongoing investigation, it will take time for my office to correct years, if not decades, of mismanagement and neglect by the former Spring Village Building Department. Valley. Failure to conduct a follow-up inspection in 2019 on violations discovered is a failure to protect the health and safety of residents, visitors and first responders. We will hold this owner accountable and ensure that these flagrant violations are corrected immediately,” said Office of Buildings and Codes Director Ed Markunas.

Other hazards identified include black mold in several apartments and deterioration of stairs and balconies.

The Bureau requests that the public submit complaints regarding building and code violations in the Village of Spring Valley at 845-364-3700 or by email at [email protected].

UN lets Taliban get in the door