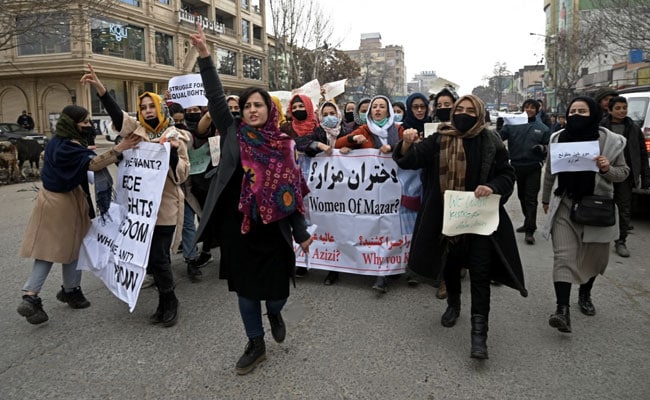 Release of four missing Afghan women activists, according to the United Nations Assistance Mission in Afghanistan

Four Afghan women activists have been released by the country’s “de facto authorities” after being reported missing weeks ago, the United Nations announced on Sunday.

Tamana Zaryabi Paryani, Parwana Ibrahimkhel, Zahra Mohammadi and Mursal Ayar disappeared after taking part in an anti-Taliban rally, but Afghan extremist Islamist leaders – whose government is still not recognized by any country – have always denied holding them.

“After a long period of uncertainty as to their fate and safety, the four ‘disappeared’ Afghan women activists, along with their relatives who also disappeared, have all been released by the de facto authorities,” the Mission said. United Nations assistance in Afghanistan. (UNAMA) said on Twitter.

After a long period of uncertainty as to their fate and safety, the four “disappeared” Afghan women activists, along with their also missing relatives, have all been released by the de facto authorities.

UNAMA demands that the rights of every Afghan be respected.

AFP reported Ibrahimkhel’s release on Friday. She disappeared with Paryani on January 19, days after she took part in a rally in Kabul calling for women’s rights to work and education.

Weeks later, Mohammadi and Ayar disappeared. Some relatives of the four protesters had also disappeared.

Shortly before her disappearance, images of Paryani were shared on social media showing her in distress, warning that Taliban fighters were at her doorstep.

In the video, Paryani calls, “Please help! The Taliban have come to our house in Parwan 2. My sisters are at home.”

It shows her saying to the men behind the door, “If you want to talk, we’ll talk tomorrow.” I can’t meet you at night with these girls. I don’t want to (open the door)… Please! help!”

Taliban government spokesman Zabihullah Mujahid recently told AFP in an interview that authorities have the right “to arrest and detain dissidents or those who break the law” after the government banned unauthorized demonstrations soon after he came to power.

The Taliban have promised a softer version of the harsh regime that characterized their first stint in power from 1996 to 2001.

But provincial authorities have imposed several restrictions on women and issued regular guidelines on how they should live.

The new authorities have effectively banned women from working in several government sectors and most secondary schools for girls remain closed.

The Taliban also issued an order that women cannot travel between towns and villages unless accompanied by a close male relative.

They put up posters in many shops in Kabul and other cities encouraging women to wear the burqa that covers everything.

Former BBC correspondent Andrew North and another foreign journalist were released on Friday after several days in detention, UNHCR said.

Mujahid said they were detained because they did not have valid identity cards and documents.

A “number” of British nationals are also being held in Afghanistan, the British government told AFP on Saturday, adding that it had raised the issue with local officials.

The Taliban are however under pressure from the international community to respect human rights as the group engages in talks with Western countries and global donors to secure aid to tackle the humanitarian crisis. in Afghanistan.

“UNAMA demands that the rights of every Afghan be respected,” the UN mission said on Sunday.

(Except for the title, this story has not been edited by NDTV staff and is published from a syndicated feed.)