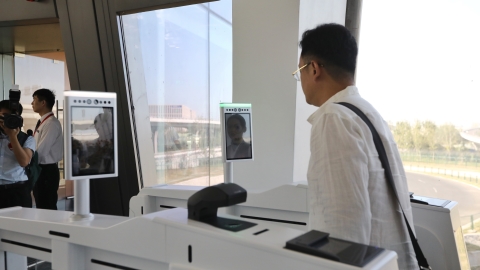 A passenger scans his face before boarding a flight at Beijing Daxing International Airport.

China’s civil aviation industry should implement a unified health code and nucleic acid testing standards for the convenience of air travelers during the COVID-19 pandemic, a national political adviser in Shanghai said Thursday.

National cities now have different COVID-19 prevention standards as well as their own health codes, which has affected air transport efficiency and hampered the recovery of the civil aviation industry, Wang Yu said, Chairman of Shanghai Spring Airlines and Vice Chairman of Shanghai Federation of Industry and Commerce.

Many air travelers have to register on various platforms or download mobile apps when landing at different domestic airports, Wang said in his proposal to the fifth session of the 13th National Committee of the Chinese People’s Political Consultative Conference, the country’s main political advisory body.

Sixty delegates from Shanghai to the National People’s Congress and 101 members from Shanghai’s political advisory body arrived in Beijing on Thursday for the annual sessions which start on Friday.

The validity period of nucleic acid tests also varies among national cities. Some require a negative report two days before arrival, while others require a report made two days before departure. Their standards also change frequently, from a two-day test to multiple tests.

“Passengers are easily confused and sometimes even stranded at airports,” Wang said. “The already sluggish civil aviation industry will suffer additional losses due to these different standards.”

He proposed to release a unified information platform across the country where each traveler’s itinerary code, nucleic acid test report and vaccination records can be quickly checked. Air travelers must show a unique code to board an aircraft.