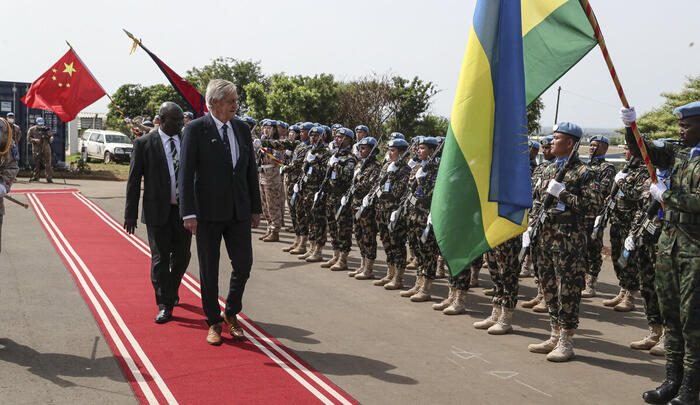 PRIYANKA CHOWDHURY JUBA – “I want young girls to dream big and join law enforcement. Who knows, one day they will serve as peacekeepers and wear blue berets,” says Christeel Philip, an officer in the United Nations Police (UNPOL) from Indonesia with a smile.

Christeel’s excitement is palpable. She has just been part of a significant ceremony held at the headquarters of the United Nations Mission in South Sudan (UNMISS), to mark the International Day of United Nations Peacekeepers.

Her enthusiasm is shared by fellow peacemaker Marcela Alicia Vallejos from Argentina. “What makes our work so special is that we can’t do it alone,” she reveals. “We work with everyone – our counterparts in the South Sudanese police and military, with the government, with humanitarian colleagues and, most importantly, with the population. We cannot build peace in isolation,” she adds almost philosophically.

The voices of these two peacekeepers found an appropriate echo in the overall theme of today’s heartfelt event – ​​People, Peace, Progress – The Power of Partnerships.

The day began with the inspection by the Special Representative of the Secretary-General, Nicholas Haysom, and Stephen Par Kuol, Minister of Peacebuilding of South Sudan, of an honor guard made up of blue berets from China, the Nepal and Rwanda, as well as a mixed group of countries representing UNPOL.

“We know peace is won when governments and societies join forces to resolve differences through dialogue, build a culture of non-violence and protect the most vulnerable,” SRSG Haysom said. “In this spirit, UN peacekeepers in South Sudan are working with national and local government authorities, opposition groups, civil society, humanitarians, media and communities, to foster peace, protect civilians, promote human rights and the rule of law.

Minister Kuol agreed. “The main objective of the United Nations today is peace and ensuring that our people can enjoy the fruits of peace and progress. This year’s theme reflects the essence of our collective efforts in South Sudan,” he said.

Perhaps one of the most moving moments of the day was when the names of peacekeepers who had paid the ultimate price in serving the cause of peace were called out.

When flags were lowered and wreaths were laid to honor their legacy, there was a collective moment of silence in their memory.

This thoughtful mood was, however, enhanced by the grace and vigor of the South Sudanese Acholi dancers, who even had.

But perhaps the simplest but heartfelt endorsement of the work UNMISS is doing in the world’s newest country as it makes the difficult journey from war to peace has come from one of ours.

“I was a soldier for 12 years in the Nepalese army. I never imagined that I would one day be selected to join a United Nations peacekeeping mission. My time at UNMISS was very special because I am really working to create a better future,” said Manita Pradhan, a peacekeeper.

In UNMISS, 12,000 military, 1,500 police and 2,500 civilians – including nearly 400 United Nations Volunteers – serve with dedication and professionalism under the United Nations flag.

Nearly 200 cases in more than 20 countries, according to WHO