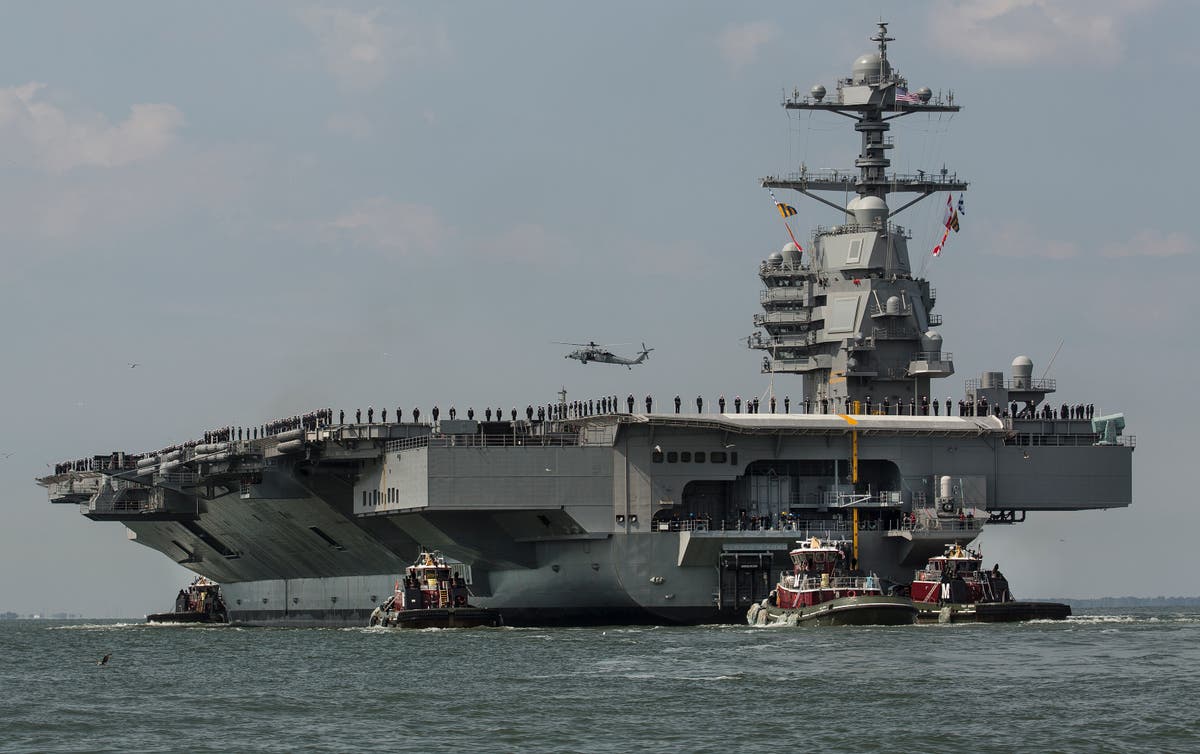 After years of delays and problems with its new technology, the US Navy’s most advanced aircraft carrier begins its first deployment next week and will train with other NATO nations in a time of aggression. growing Russian in Ukraine.

The USS Gerald R. Ford departs the world’s largest naval base in Norfolk, Virginia on Monday along with destroyers and other warships, the US Navy said in a statement Thursday. The carrier battle group will join ships in the Atlantic Ocean from countries such as France, Germany and Sweden for various exercises, including anti-submarine warfare.

“The Atlantic is an area of ​​strategic interest,” Vice Admiral Daniel Dwyer said in a statement. “Our primary objective is to contribute to a peaceful, stable and conflict-free Atlantic region through the combined naval power of our allies and partners.”

Dwyer commands the US Navy’s 2nd Fleet, which oversees US warships as they deploy between the US East Coast and the Barents Sea off the coasts of Norway and Russia. The United States has focused its attention on the North Atlantic in recent years after the Russian military stepped up operations at a pace not seen since the end of the Cold War.

Bradley Martin, senior policy fellow at the RAND Corporation, told The Associated Press that next week’s drills will showcase US military capabilities and support for NATO. Concerns about Russia are part of the mission’s larger calculus.

“We are also showing Russia that there is a range of forces that it would have to face if it went beyond Ukraine or escalated into Ukraine in a way that we find unacceptable,” Martin said. , a retired sea captain.

American aircraft carriers demonstrate the unique ability of the United States to send combat aircraft around the world, Martin said. Despite the high-profile problems with the USS Ford, he said it was still part of a larger display of the nation’s military might.

The $13.3 billion warship – the nation’s most expensive – is the first of the Navy’s new class of Ford aircraft carriers. They are designed to carry a greater variety of aircraft and operate with several hundred fewer sailors. They use an electromagnetic system to launch planes, which replace steam-powered catapults and are supposed to increase flight missions by a third.

Ford’s first deployment comes five years after it entered service. And it has been beset by various problems, including problems with the launch system and the elevators that bring missiles and bombs to the jets on the flight deck.

A Congressional Research Service report from late August said the Navy had “struggled to fulfill the promises it had repeatedly made” to defense oversight boards to complete, test and certify the elevators of weapons. The Navy said the ship’s 11th and final weapons lift was certified in December.

In 2017, then-President Donald Trump told Time magazine that the Navy should go back to steam to launch planes because the electromagnetic system “costs hundreds of millions of dollars more and it’s not Well”.

Dwyer, the admiral, told reporters in a phone call on Monday that the Ford “has already successfully completed more than 10,000 catapults and carrier landings.”

Martin of the RAND Corporation said the system has yet to launch planes at the higher speed for which it was designed. And it will likely take years to do, which he says isn’t unexpected for the first in a new class of carriers.

“Carrier strike groups are always a power projection center for the Navy,” Martin said. “The fact that the lead ship of a new class had significant development issues doesn’t change that.”

Should you buy a car from a “bad credit, no credit” dealership?