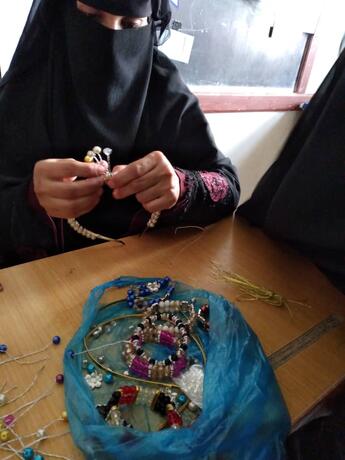 MABYAN DISTRICT, Hajjah Governorate, Yemen – At 16, Ghada * was illiterate, with no work experience, no job prospects – and a mother of three.

One of the seven children herself, she had been married at the age of 12 by her father, a daily agricultural worker. â€œMy family is poor,â€ she said. “He accepted the first marriage proposal that came to him, not only for me but for my sisters, not caring that we were just children.”

As in many poor Yemeni families, her father viewed her marriage as one less mouth to feed. Despite Ghada’s protests, she was forced to marry. She got pregnant when she was 13, but when she had a daughter, her husband – who wanted a boy – abused Ghada physically and emotionally, forbidding her to leave the house for a year.

When she got pregnant a second time, there was no nearby health center to determine the baby’s gender, so for nine months Ghada lived in fear of having another daughter. When the baby was a boy, she was finally allowed to leave the house to visit her family.

She hoped that after telling her father about the imprisonment, beatings, cruel slurs and daily humiliations, he would provide refuge. She was wrong. Having no options in front of her, she returned to her husband, who promised that things would change. They didn’t, and at 15, Ghada found herself pregnant a third time.

Desperate, she tried to poison herself with pesticides stolen from her husband. Her sister-in-law saved her, reminding her to live for her children and seek medical care. Yet Ghada’s father refused to let her stay when she ran away again – the family couldn’t afford to feed more people. â€œIt took a long time for my dad to figure out how broken I was,â€ she said.

Almost two-thirds of girls in Yemen are married before age 18, and many before age 15, according to a 2013 Demographic and Health Survey, the most recent available. Yemen is one of the few countries in the Arab region that does not have a minimum legal age for marriage; after a bill setting the legal minimum at 18 was never passed due to the outbreak of a conflict six years ago, which reduced the country to a humanitarian crisis.

The crisis has only exacerbated the problem. A UNFPA study in three governorates showed that child marriage rates were highest among displaced populations, with 1 in 5 displaced girls aged 10 to 19 being married, compared to 1 in 8 girls in the country. host community. One in 10 girls under the age of 18 loses their baby during childbirth.

A collapse of social, health and legal services combined with a the shattered economy and inadequate aid funding limit access to gender-based violence response services, as well as sexual and reproductive health services. Funding is running out quickly and without more, more than 500,000 women and girls will be denied psychosocial, medical, legal and other support services in 2021. “It is urgent that essential services for women and girls are not only maintained but also expanded, â€said Nestor Owomuhangi, UNFPA representative in Yemen.

A chance for a new start

Depressed and fearful, Ghada had bottomed out until a neighbor greeted her and Ghada’s mother accompanied her to a secure space supported by UNFPA in Hajjah Governorate. There she was referred for psychiatric care in the town of Hajjah, the only place in the entire governorate (population: approximately 3 million) where such care is available for women.

A secure space lawyer helped her secure custody of her two daughters and her son, who had been taken away by her husband. She took a sewing training course offered in the secure space, where she also learned to read and write, and which provided her with financial assistance. And after completing her training as one of the most engaged participants, she was given a sewing machine and materials to support herself and her family.

â€œEducation has helped me become economically independent so that I can have my freedom of choice,â€ Ghada said. â€œI need to educate my children so that they can choose for themselves in their life.

She has left her husband and is back in her father’s house, no longer a pre-adolescent girl seen as an economic burden but a 16-year-old nanny, herself a child for only a few years.