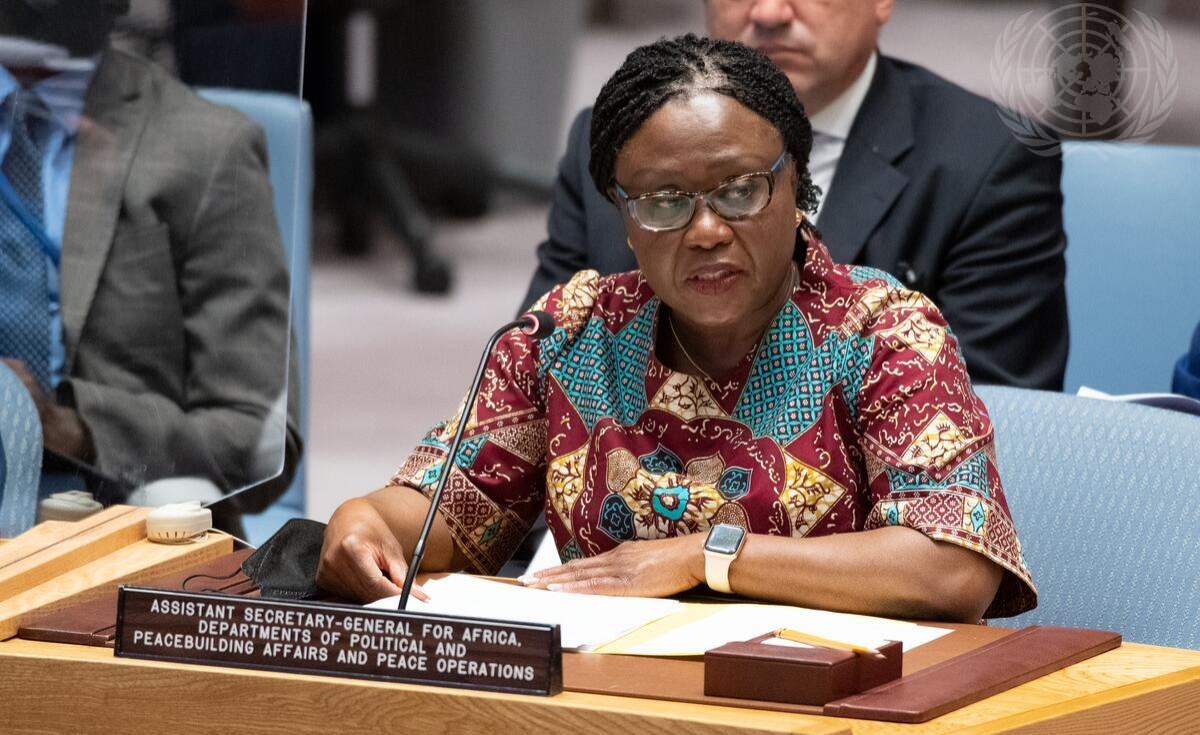 Libya: “The priority of the United Nations in Libya remains to facilitate a return to the electoral process”, says ASG Pobee

Thank you for giving me the opportunity to brief the Security Council on recent developments in the situation in Libya.

The general situation in Libya remains very unstable. Despite the progress made, the constitutional and political stalemate persists, prolonging the tense security environment, with an increase in the number of clashes in and around Tripoli. The economic situation remains dire, exacerbated by the politicization of the National Oil Corporation. We have witnessed demonstrations by Libyans frustrated by the lack of progress in the elections and the poor state services. Furthermore, the human rights situation in the country remains very worrying.

Since the last briefing to the Council on 27 June, progress has been made on the constitutional path. Special Counsel Williams called a high-level meeting between the Speaker of the House of Representatives (HoR) and the Chairman of the High Council of State (HSC). The meeting took place at the United Nations in Geneva from 28 to 29 June.

The leaders of both chambers overcame major contentious points and outstanding provisions of the 2017 constitutional proposal, and agreed on some of the transitional measures that would lead to the holding of national elections. The two leaders agreed on a bicameral legislature as well as defining the responsibilities of the president, prime minister, cabinet of ministers and local government. A consensus was also reached on the creation of provinces based on existing electoral constituencies in Libya and on a revenue distribution mechanism. In addition, the two leaders mapped out a roadmap, with deadlines and a series of steps leading to the holding of national elections.

Despite promising progress, an outstanding issue prevented the agreement from being finalized in Geneva. The parties did not reach a consensus on the question of the conditions of eligibility of presidential candidates.

Special Counsel Williams stayed in touch with the parties and urged them to bridge that gap.

On July 21, she participated in a meeting of international partners in Istanbul. She reiterated that the only lasting solution that puts Libya firmly on the path to peace and stability, including resolving the current political crisis and restoring the legitimacy of Libyan institutions, is through the holding of elections. national as soon as possible.

We again call on the members of this Council and all of Libya’s international partners to continue to exert their influence on the two leaders to reach a definitive agreement that would allow elections to be held as soon as possible.

On July 1, protests took place across Libya, including in Tripoli, Benghazi, Al-Bayda and Tobruk. The parliament building in Tobruk was stormed and damaged.

Protesters expressed frustration over the persistence of political divisions and deteriorating living conditions. They demanded the rapid holding of elections and solutions to the electricity crisis and fuel shortage in the country.

We urge Libyan political actors to heed the call of their people and show responsible leadership in addressing their grievances.

Ongoing political divisions, including the crisis of the executive and sovereign institutions, prolong the tense security environment in and around Tripoli.

As armed groups continue to position themselves in favor of Mr. Dbeibah or Mr. Bashagha, the risk of escalation increases. Military activity also increased in the western region, especially on the eastern flank of Tripoli, Misrata and in the outskirts of Sirte.

We are deeply concerned by the armed clashes in Tripoli that took place on the night of July 21 and the skirmishes in Misrata on July 23, between armed groups which resulted in an unconfirmed number of civilian casualties.

We reiterate the importance of maintaining the ceasefire in Libya and urge all parties to exercise maximum restraint and resolve differences through peaceful dialogue. We also remind all parties of their obligations under international humanitarian law to protect civilians and civilian infrastructure.

I welcome the resumption of the activities of the Joint Military Commission (JMC) 5+5 and the holding of meetings in Cairo and Tripoli between the military commanders of the Libyan army. I welcome their call for the maintenance of calm and stability in the country, as well as their efforts to unify the military institutions.

I am also pleased to report that Libyan observers and UNSMIL international observers held two joint workshops in Tunis in June and July to operationalize the Libya-led and Libya-owned ceasefire monitoring mechanism.

UNSMIL’s ceasefire monitoring component, the 5+5 Joint Military Commission and Libyan observers plan to meet in Sirte in early August to finalize a proposed withdrawal plan for foreign forces and mercenaries. On this occasion, they also intend to activate a Joint Operations Room.

We are concerned about the continuing disagreement over the leadership of the National Oil Corporation (NOC).

On July 12, Mr. Dbeibah appointed Mr. Bengdara, a former governor of the Libyan Central Bank, as the new chairman of the NOC. He replaced Mr. Sanalla who had led the NOC since 2015. Mr. Sanalla rejected the decision to replace him and intends to take legal action in Libya.

Meanwhile, Libya resumed oil exports on July 19. Since April 16, the shutdown had cut Libyan oil exports by two-thirds and cost the country US$4 billion in lost revenue. It is too early to confirm whether oil production will resume at full capacity and whether changes to the NOC will further impact oil production and export.

We stress the need for the NOC to remain neutral and free from the pressure of political interests.

We call on all the actors concerned to overcome their differences with a view to ensuring the full exploitation of the country’s oil fields. We also reiterate that Libya’s natural resources belong to all Libyans, revenue from oil exports should be distributed equally and equitably to improve service delivery.

The United Nations reiterates its call on all actors to avoid actions that would result in a regression in oil production and export levels at this critical juncture.

The dire economic situation has had a negative impact on people’s basic rights to basic services and access to food, water and sanitation, health care and education.

In addition, UNSMIL received reports that medical facilities were running out of oxygen for surgeries and intensive care and clinics across the country were facing severe hardship due to prolonged power cuts and lack of fuel. for generators.

The Mission also received reports that dozens of demonstrators who participated in the July 1 demonstrations had been arbitrarily arrested by armed groups.

The United Nations reaffirms the fundamental rights to peaceful assembly, association and freedom of expression, and calls for the release of all those arbitrarily detained.

The increase in incidents of violence against women during Eid, including the killing of at least six women – including a girl – in Benghazi in the east, and in the town of Ain Zara and Gharyan in the Western Libya must be condemned.

Meanwhile, civic space continues to erode. Arbitrary restrictions continue to be imposed on civil society organizations. Politically active women and men who defend human rights are the target of hate speech and incitement to violence, compromising their safety and security.

We remain concerned about the continued detention of nine civil society and humanitarian workers arrested between November 2021 and February 2022 for peacefully exercising their right to freedom of expression. On July 6, four of these arbitrarily detained persons were again barred from attending their second scheduled hearing.

UNSMIL continued to receive reports of serious allegations of torture against Libyans, migrants and asylum seekers in detention centers and prisons. UNSMIL observed a wave of discrimination, expulsions and arbitrary arrests of migrants as they celebrated the holiday in the cities of Zuwara, Zawiya, Tripoli, Misrata and Sabrata in western Libya. More worryingly, a radio station in Zawiya broadcast hate speech against migrants, claiming they were responsible for spreading disease.

Get the latest African news straight to your inbox

We need to confirm your email address.

To complete the process, please follow the instructions in the email we just sent you.

The Libyan authorities must investigate all allegations of torture and other human rights violations. Those responsible must be held accountable at the national level or, where appropriate, by international justice mechanisms, such as the International Criminal Court.

In this context, I welcome the recent nine-month extension of the independent fact-finding mission on Libya and the conclusions of its recent report, which includes recommendations on the human rights situation in the country.

Although the priority of the United Nations in Libya remains to facilitate a return to the electoral process, we must continue to support and encourage our Libyan counterparts to focus on effectively resolving the main drivers of the political and economic impasse, including those that sparked the July 1 protests.

The message from young Libyans to their leaders was that they needed to do more to improve their living conditions and that they wanted elections to take place as soon as possible in order to choose their legitimate representative.

We also reiterate the readiness of the United Nations to support the efforts of the African Union to organize a national reconciliation conference. In this regard, we welcome the recent meeting at the technical level held in Brazzaville, at the initiative of President Denis Sassou Nguesso, bringing together the African Union and other partners in support of this initiative.

We count on the members of this Council and on the entire international community to continue to support the United Nations in its efforts to facilitate a mutually acceptable solution that will put an end to the persistent crisis.

Thank you for your attention.

Best Companies to Refinance a Car Loan with Bad Credit 2022