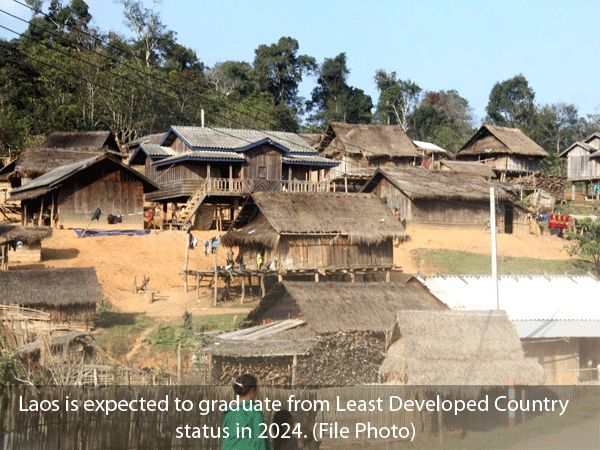 VIENTIANE (Vientiane Times / ANN): Laos remains firmly committed to removing itself from the United Nations (UN) list of least developed countries (LDCs), despite the many challenges that lie ahead.

Deputy Foreign Minister Thongphane Savanphet reiterated Laos’ commitment on Tuesday (September 8) during a video conference with the Office of the United Nations High Representative for the Least Developed Countries, the Foreign Ministry said in a statement. Press release.

The meeting aimed to prepare for the next review of Laos’ exit from LDC status.

The review – the second of its kind – is expected to take place early next year. If Laos is deemed to have achieved the targets set by the UN, the country should officially leave the list of LDCs in 2024.

In 2001, the government set a target date for phasing out LDC status by 2020, but this goal could not be met.

To be considered for reclassification of LDCs, countries must meet two of the three criteria when assessed in two consecutive triennial reviews, according to the UN.

Laos was judged to satisfy two of the three criteria during the first review, which took place in 2018. Only the criterion of economic vulnerability remains to be fulfilled.

The 2018 review found that Laos’ gross national income per capita of $ 1,996 exceeded the lowest graduation threshold of $ 1,230. The human capital index stands at 77.2 against the low point of 66.

“Economic vulnerability is the only criterion that we have not yet met,” the foreign ministry said.

“However, if Laos is still able to meet two of the three criteria or meet all the criteria of the second UN review in 2021, it will be proposed that Laos leaves the list of LDCs by 2024. “

Laos is one of the 47 countries classified by the United Nations among the least developed countries.

The Party and the government of Laos attach great importance to the reclassification of LDCs.

This is reflected in the fact that the policies and guidelines in this area have been integrated into the 8th five-year national socio-economic development plan 2016-2020.

This has enabled Laos to enjoy high-level economic growth of 6-7% per year, according to the ministry. In addition, the poverty rate has fallen from 46% in 1992 to only 18% today.

Along with the progress made, challenges are emerging, including those caused by the Covid-19 pandemic, which has severely affected the economy and reduced growth.

Tuesday’s meeting also discussed the Laos-UN cooperation plan, including the joint development of strategies for the transition period of graduation and post-graduation to address potential challenges after graduation. of the diploma.

The clothing sector will be hit hardest by trade losses when Laos is no longer able to benefit from special tariff allowances upon graduation from LDCs in 2024.

In the European Union alone, the clothing industry can expect trade losses of up to US $ 56 million, according to the latest research paper from the International Trade Center project funded by the EU.

However, the Deputy Minister of Planning and Investment, Dr Kikeo Chanthabouly, allayed concerns by declaring that strategies and plans for cooperation with development partners, including the UN, would be drawn up for a further cooperation during the transition and post-graduation period to ensure Laos’ success and sustainability.

“This will ensure that Laos does not fall back into the LDC category in the future,” he told the Vientiane Times.

Although development grants are expected to decrease after graduation, the number of low interest loans is expected to increase as Laos becomes eligible for more credit.