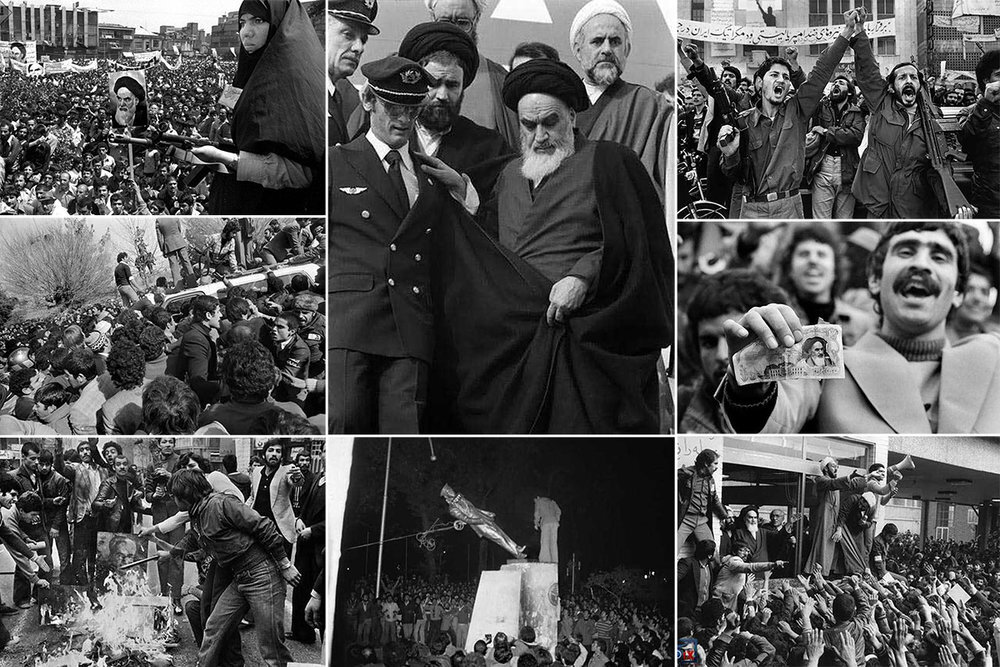 Between January 1978 and February 11, 1979, the Muslim revolutionary people of Iran, under the able leadership of Ayatollah Ruhullah Khomeini, the founder of the Islamic Revolution, expressed their opposition to the secular and US-backed regime of Mohamad Reza Shah.

Mohammad Reza Shah’s regime had caused much suffering and economic gap and inequality in Iranian society and its secret police (SAVAK) brutally tortured Iranian youth, hence widespread discontent among lower classes, Shiite clergy , bazaar traders and students led in 1978 to increased support for Imam Khomeini who was living in exile in Paris.

The Iranian dictator and his family fled Iran on January 16, 1979, and Imam Khomeini returned home after 15 years in exile, and nationwide protests ended with the victory of the Islamic revolution February 11, 1979.

The impressive notions, ideologies of the Islamic Revolution have become a model for all independent Muslim countries and nations seeking freedom.

Today, having passed 42 years, the Islamic Republic of Iran, under the leadership of Ayatollah Seyyed Ali Khamenei, is at the forefront of the fight against global arrogance and oppressive powers like the United States and the Zionist regime.

In January 1963, the Shah of Iran issued a series of reforms called the â€œWhite Revolutionâ€. This six-point plan was supposed to be prepared for Iran’s future development; however, the anti-religious and Western nature of the program was clear to religious figures, including Imam Khomeini.

Imam Khomeini saw these reforms in favor of the Shah and his monarchy, and a ground for more American and Zionist plots in Iran.

Talks between these religious figures and representatives of the Shah all ended without any results, with the Shah refusing to clarify the dimensions of the program.

Religious and public opposition to the Pahlavi regime has continued in a variety of ways, from declarations to the cancellation of Nowruz (Iranian New Year) celebrations.

However, the turning point was the speech given by Ayatollah Khomeini on June 3, 1963, at the Feyziyeh seminary school.

The ceremony was held to commemorate the tragic martyrdom of Imam Hussein (PSL) in Karbala. In his speech, Imam Khomeini sharply criticized the Shah’s government for its anti-Islamic policies and drew parallels between the Umayyad tyrant Yazid, on whose orders Imam Hussein was killed, and the Shah.

Addressing a large gathering of people, students and religious scholars, the Imam exposed the betrayals of the Pahlavi regime to the Iranian nation. He stressed, â€œThey are against the foundations of the divine religion of Islam and the ulemas and aim to destroy Islam and the ulemas. O people! know that our Islam and our country are threatened. We are deeply concerned about the situation in Iran and the state of the Shah’s despotic regime. “

Two days later, at three in the morning, security agents and Pahlavi regime commandos descended on Khomeini’s home in Qom and arrested him.

Such was the influence and popularity of Imam Khomeini that the commandos refused his request to wait only 5 minutes for him to perform his morning prayers, so as not to risk people finding out about the detention. .

Moreover, they did not even dare to start the engine of the car and pushed the car a certain distance because they were afraid that the noise of the engine would wake up the neighbor who would for sure prevent the arrest. They hastily transferred him to Qasr Prison in Tehran.

Imam Khomeini was first imprisoned, then under house arrest from October 1963 to May 1964; on November 4, 1964, he was secretly taken to Ankara and then to Bursa, Turkey. On September 5, 1965, he moved to Najaf, Iraq, and remained there until Saddam’s regime deported him.

Finally, under pressure from the Pahlavi regime, he was exiled to Neauphle-le-ChÃ¢teau, Paris on October 6, 1978.

The protests of June 5, 1963, known as the Khordad 15 Uprising, can be considered one of the most significant events in contemporary Iran, which kindled the flames of the Islamic revolution and sparked a series of chain events, leading to the victory of the Islamic Revolution some 15 years later.

On June 5, 1963, the Iranian people, wearing peculiar white clothes used to bury the dead as a sign of their willingness to die for their cause, staged massive protests against the U.S.-backed Shah, following the announcement of the detention of the founder of Islam. Revolution, Imam Khomeini the day after his historic speech against the Pahlavi regime.

The regime attacked the people and brutally suppressed them, martyring and injuring large numbers of Iranian Muslims.

The historic uprising known as “15 Khordad” marked the starting point of the Islamic movement that would change the fate of Iran.

Although Imam Khomeini was exiled a year later, the movement culminated with his eventual return home in February 1979.

In early 1979, political unrest, nationwide street protests and Iranian public discontent across the country escalated and the Iranian dictator and his family fled Iran on January 16 never to return. .

Upon his arrival in the country, Imam Khomeini was greeted by millions of Iranians.

Victory of the Islamic revolution, collapse of the Pahlavi dynasty

On February 11, the commanders of the armed forces visited Imam Khomeini’s home and tendered their resignation, declaring their support for the founder of the Islamic Revolution.

After the armed forces declared neutrality and the regime’s main institutions and all remnants collapsed, Shapour Bakhtiar, who was the last Iranian prime minister under Mohammad Reza Shah Pahlavi, quickly fled Iran for France. .

This influential event marked the end of 2,500 years of monarchy in the country, Imam Khomeini called on the people to restore peace and order, and the independent Islamic Republic of Iran was officially established.

98% of Iranians voted for the Islamic Republic

All Iranians aged sixteen and over, men and women, were invited to vote in a referendum on the issue of accepting the Islamic Republic as a new form of government and constitution.

On April 1, the referendum results were announced, with 98.2% of Iranians voting for the Islamic Republic.

Every year, Iranians celebrate the anniversary of their Islamic revolution from February 1 to 11, known as the Ten Day Fajr (Dawn) ceremonies.

Every year on the 22nd of the month of Bahman in the Persian calendar (February 11), Iranians participate in ceremonies attended by senior officials to renew their allegiance to the Islamic establishment and to Imam Khomeini, the late founder of the Islamic State. Islam. Republic.

Reported and compiled by Marzieh Rahmani

Pakistan not on Biden’s 40 country list for climate talks