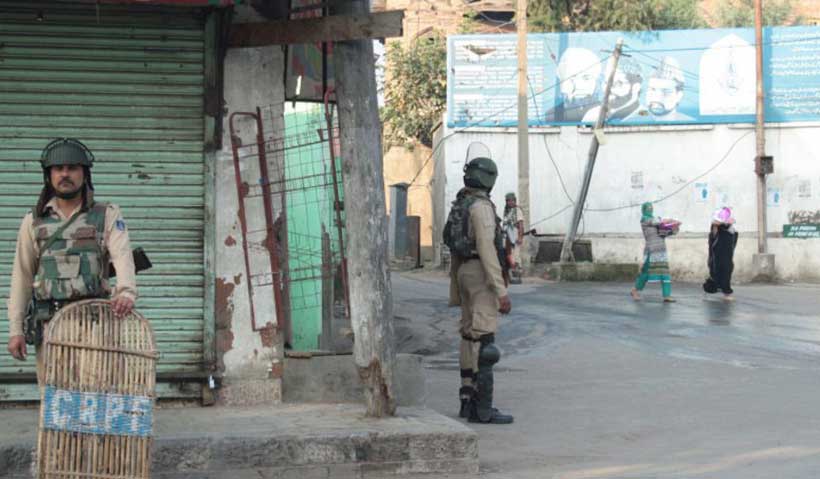 Every year on December 10, the United Nations celebrates International Human Rights Day. When the General Assembly adopted the Universal Declaration of Human Rights in 1948, it was proclaimed as a “common standard of achievement for all peoples and nations”.

The Universal Declaration of Human Rights sets out a wide range of fundamental rights and freedoms to which we are all entitled. It guarantees the rights of every individual everywhere, without distinction of nationality, place of residence, sex, national or ethnic origin, religion, language or any other status.

The day passes and passes without any tangible effect on the lives of people deprived of human rights. Besides the legal ordeal over the Kashmir conflict, there is a human rights dimension to the conflict. Kashmir has been reduced to prison. Even Mehbooba Mufti, a former BJP ally, was forced to label Kashmir as a Guantanamo Bay prison, saying “Kashmiris literally feel trapped in a cage from which almost all exits are blocked.”

India’s crackdowns and cordon and search operations continued in occupied Kashmir even on Human Rights Day. Amnesty International has called for unconditional and unrestricted access to news and information from the valley.

According to the United Nations High Commissioner for Refugees (UNHCR), more than 1,250 Kashmiris were blinded by metal pellets used by Indian security forces from mid-2016 to the end of 2018.

Indian troops have martyred 95,917 innocent Kashmiris, including 7,215 in detention, have been widowed 22,939, orphans 107 and 855 and assaulted 11,245 women since January 1989. India’s actions violate UNSC resolutions and the law international, including the Fourth Geneva Convention and Security Council Resolution 122.

They did not spare even peaceful protesters like Parveena Ahanger, 62, and the families of hundreds of victims of enforced disappearances. They are said to have gathered in a park to search for the whereabouts of their children or spouses who have disappeared during decades of conflict.

Last month, prominent human rights activist Khurram Parvez was arrested under the Prevention of Illegal Activities Act (UAPA) for “criminal conspiracy and war on the government”. Parvez, 44, is a program coordinator at the Jammu-Kashmir Coalition of Civil Society, a leading group that documents and campaigns against human rights violations by Indian forces in occupied Kashmir over the past 20 years.

The Society published detailed reports on torture, killings of civilians, rapes and unlawful detentions, and ended the impunity afforded by the armed forces in the disputed region. In 2008, a revelation about the presence of more than 2,000 anonymous graves shocked the population.

Parvez was previously arrested in 2016 under the Public Safety Act. This is another draconian law like the UAPA under which a person can be detained for a year or more without trial.

In its 2018 report, the Office of the United Nations High Commissioner for Human Rights (OHCHR) extensively cited the Society’s findings. In another 2019 report, the UN called for the formation of a commission of inquiry into allegations of rights violations in the region.

The reporting angered the Modi government so much that it cracked down on journalists and ordinary people on Rights Day. India has virtually “criminalized human rights work” in occupied Kashmir.

India ranks among the most dangerous countries for journalists, according to Reporters Without Borders, which released its 2021 World Press Freedom Index. The coordinated hate campaign against journalists’ calls to kill the journalists concerned. From May 2019 to August 2021, 256 journalists were assaulted.

Journalism has become a crime in India. In 2017, prominent journalist Gauri Lankesh, known for his harsh criticism, was shot dead in Bangalore. In addition, Rana Ayyub a famous journalist who had denounced Modi and CM from Gujarat in “Gujarat Files” was the victim of a campaign of intimidation. The Indian government was annoyed by his interview in BBC Hardtalk’s Stephen Sackur. She alleged that the Indian government had “tried every tool in the book to silence its voice and its journalism.” Even the UN has exposed the true face of India by issuing a report on the excessive use of force by police on public roads against journalists and human rights defenders.

India has said it is illegal to post comments about Rawat’s death shrouded in mystery on social media. The mysterious death of India’s Chief of Defense Staff raised eyebrows in India. People in general have raised questions about the super safe Mi-17V5 helicopter which flew so low it crashed head-on into a tree. People remember previous accidents including a fire on the Indian aircraft carrier in 2019 and an explosion on an Indian submarine in 2013. They attribute the accidents to widespread incompetence and failure to follow operating procedures. permed.

General Gungho has been criticized in the media for his untimely statements. For example, he had sworn to change the DNA of Kashmiris. He awarded a certificate of praise to Major Leetul Gogoi who attached a Kashmir to the hood of his jeep and paraded it through several villages. Gogoi was then surprised with her lover at a hotel in Srinagar. But Rawat freed him with a slap on the wrist. He justified the lynching of anyone suspected of being an activist. He opposed the recruitment of women into the forces. The controversial general had launched a reform program that involved readjusting the three services.

In interviews on YouTube, Rawat has vehemently defended integrated theaters of command. But, the head of the IAF expressed reservations about this. It was speculated that the crash could be the result of inter-service rivalry, reflecting poor coordination between the military and the IAF.

Attack on the Christian School

The condition of other minorities is also miserable. According to a report released by human rights groups, more than 300 attacks on Christians took place in the first nine months of this year across India, at least 30 of them in Karnataka.

Recently, at least 100 members of Vishwa Hindu Parishad and Bajrang Dal vandalized a missionary school in the Vidisha district of Madhya Pradesh, Ganj Bedosa. Hindutva violence took place while students in class 12 were taking an exam. The principal of the school, Brother Anthony Tynumkal, said the crowd was armed with iron bars and shouted “Jai Shri Ram” and “bharat mata ki jai”Slogans.

In a cataclysmic development, several parties, including Dal Khalsa, the representative organization of the Sikhs, convened a conclave of leaders and delegates from struggling minority communities (Kashmiri, Sikhs, Tamils, Nagas, Twiprassa and others) in Amritsar in the occasion of World Human Rights Day. They discussed the worsening human rights situation in India and occupied Kashmir, and the persecution of minorities.

The conclave is interpreted as the emergence of the oppressed popular movement from all over India.

The conclave among others criticized police excesses, growing intolerance and expressed solidarity with struggling nationalities, peoples and regional identities.

Participants denounced the recent murder of 15 innocent civilians in Nagaland and held the Indian government responsible for these tragic incidents. They called for the withdrawal of the Armed Forces Special Powers Act under which the Indian military continues to terrorize various states. They alleged that India is only a democracy in name but in reality a totalitarian and majority Hindu state.

They said the repeal of Articles 370 and 35A in occupied Kashmir, followed by restrictions on civil liberties and bogus encounters, proves how totalitarianism and majority regimes distort civil liberties. They also condemned the recent arrest of notorious Kashmiri human rights defender Khurram Parvaiz by India’s infamous National Investigation Agency (NIA).

Speakers said that the Indian government’s apathy towards the anti-CAA movement continues, that political prisoners continue to languish in prisons across the country, that Muslims and Dalits continue to live in a climate of fear in because of hate speech sustained against them.

Speakers criticized Modi’s regime for refusing to acknowledge the deaths of 700 farmers and the Lakhimpur Kheri incident in which 3 farmers and a journalist were crushed to death.

Addressing the occasion, Atif Gilani, son of famous Kashmiri intellectual, Professor Syed Abdur Rahman Gilani (late), said that minority communities will have to fight together to guarantee their rights. He said the fight was on and he would certainly succeed.

Neingulo Krome, secretary of the Nagaland organization, said that although New Delhi has called the killings of Nagaland civilians by the Indian military as a case of mistaken identity, it was an operation totally fabricated that claimed the lives of innocent people. “Those who lost their lives were local workers who took the same route to their workplace. After killing them, the forces also attempted to label some civilians as militants by planting weapons and dressing them in camouflage and boots, ”he added.

The organization’s former secretary-general Dr Veenuh said after the abolition of Articles 370 and 35A in occupied Jammu and Kashmir, the Indian government turned a blind eye to the rights of residents of Nagaland . He criticized the Modi government for reneging on the 2015 agreement which recognizes the distinct identity of the Naga people and promises to share sovereign power.

The UN should force India to allow open access to UN Human Rights Council special procedures mandate holders for independent investigations into human rights violations. The Amritsar conclave bodes well for the protection of the human rights of minorities as enshrined in the Indian constitution. The conclave is Modi’s nightmare. The BJP won 31% of the votes cast in 2014 and more than 37% in 2019, thanks to the Modi-magic wave. The population of India is 121 crore according to the 2011 census. Of this number, the 41.73% wave of the “oppressed movement” seems to have turned against it (Muslims 14.23%, Christians 2.3 %, the listed castes (numbering 1108) 16.6%, and listed tribes (744) 8.6%.