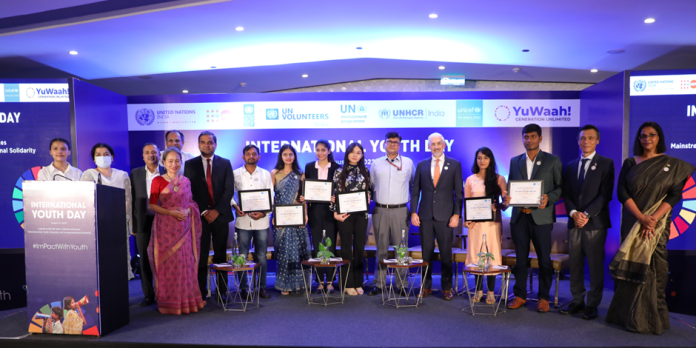 New Delhi: To inspire and rally the support of India’s more than 350 million young people for the Sustainable Development Goals, UN agencies in India marked International Youth Day by naming India’s first-ever UN Advocates YuWaah and concluding a pact for the centrality of young people.

The first cohort of UN India YuWaah Advocates comprises 6 young people from diverse backgrounds and geographies, who will inspire action for the SDGs on high-level decision-making platforms. In turn, they will receive access to information, skills and mentorship support, and work in partnership with external experts from UN agencies and partner networks, celebrity advocates, ambassadors and digital influencers to amplify and highlight youth priorities and perspectives to shape the 2030 Agenda.

Representatives of UN Agencies, Government of India, Private Sector, CSOs and Youth concluded a Youth Centrality Pact and committed to the urgent need to ensure a youth centered approach to the effectiveness and relevance of programs at scale, and are committed to the principles of diversity, inclusion, equity and meaningful partnership with young people.

Ch. Sanjay Kumar, Secretary, Ministry of Youth and Sports said, “The UN India YuWaah Advocates program is a remarkable vision and facilitates meaningful youth engagement at the highest levels of policy and decision-making, which are spaces that have traditionally been elusive for the voice and participation of young people. youth. Let us unite to ensure that young people in this country are supported in a sustained and meaningful way to create impact.

Mr. Shombi Sharp, United Nations Resident Coordinator in India, said, “Young people have proven time and time again that they are ready to take on the world’s most pressing challenges with incredible energy and creativity. I congratulate the UN India YuWaah Advocates on their appointment and look forward to helping bring their solutions for the 2030 Agenda and sustainable development to life. Today marks a new beginning, a new platform for partnership between young people in India and the UN in India for a more just, inclusive and equitable world, where no one is left behind. When young Indians lead, as the greatest generation of young people in the world, the world will follow.

Mr. Yasumasa Kimura, Acting Representative, UNICEF India and Co-Chair of the Board of YuWaah (Generation Unlimited India), said: “In the 75th year of independence, India is becoming a global leader who will show the world how to build back better after the pandemic, and the driving force behind this dynamism is India’s youth. UNICEF, in collaboration with the UN in India, is proud to build on this unique generational moment through the YuWaah movement which aims to build an empowering ecosystem that provides young people with the future-ready skills they need. and the leadership positions they deserve. The launch of the UN India YuWaah Advocates is another step in the direction of meaningful partnership with young people and integrating their voice into decision-making and advocating for our collective future.

How to get free diamonds and other rewards