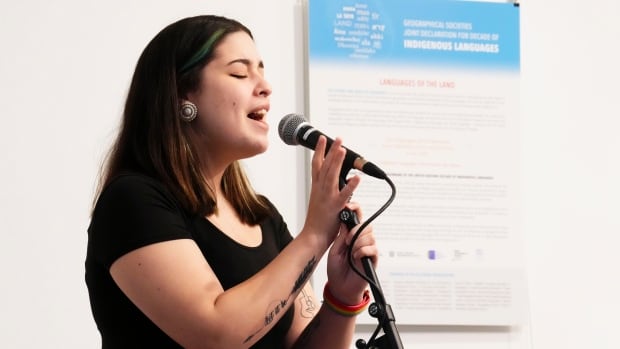 Representatives from across the country gathered in Ottawa on Friday to celebrate the Canadian launch of the United Nations Decade for Indigenous Languages.

The launch was held at the Royal Canadian Geographical Society by Governor General Mary Simon and Perry Bellegarde, former National Chief of the Assembly of First Nations.

Simon, who is Inuk, is the first Indigenous Governor General and spoke about the importance of preserving languages, using her first language, Inuktitut, as an example.

She said she hoped her language would grow, not just survive, and said it was crucial to keep using the languages ​​in order to protect them.

“I think we can all agree that there is no better way to preserve and improve one’s language than to use it and use it in all places possible, in all places where we can,” Simon said.

Mi’kmaw singer Emma Stevens of the Eskasoni First Nation in Nova Scotia sang three songs at the event, one honoring the MMIWG, another a Cape Breton love song and a Mi’kmaw version of the beatles song Blackbird. She said it was an amazing experience to be there to sing in her language.

“Being an Indigenous myself and coming from a community myself where the language is losing its value there too…it was great to be part of the event,” she said.

She said she hopes to use music as a way to keep the language alive.

“I hope I can bring more language with music into my community…because music is a universal language,” Stevens said.

Joshua Morin, a member of the Métis Nation of Alberta who teaches Michif in St. Albert, Alta., spoke at the event reciting a 1982 prayer from Father Guy Lavallee. He said the words he spoke were appropriate, as they discussed language and had been recited previously in 1982 during constitutional talks in Ottawa.

Morin said he was honored to be part of the event.

“When I think of this decade, I’m very proud of the work that people have done, that people continue to do,” he said.

“[I’m] just very, very proud and honored to be able to continue this work for future generations.”