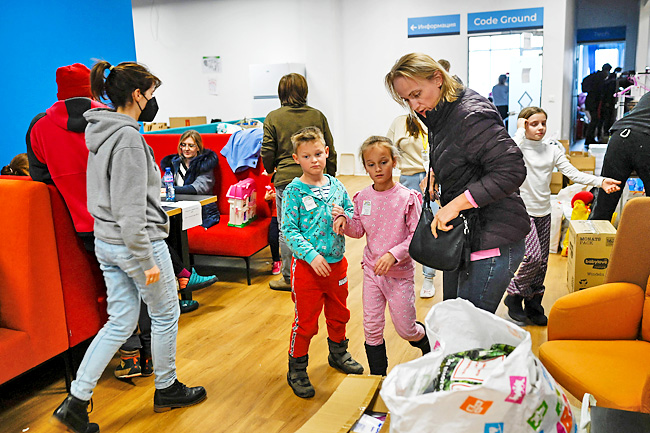 The United Nations High Commissioner for Refugees said there were 2,597,543 refugees who had fled Ukraine so far, in the latest update yesterday afternoon.

The figure was 92,650 higher than last count on Friday.

It is the biggest exodus of refugees from Europe since World War II, according to the head of the UN refugee agency, Filippo Grandi.

Before the conflict, Ukraine had some 37 million inhabitants in the regions under its control, excluding the Crimea annexed by Russia and the pro-Russian breakaway regions in the east.

Poland hosts more than half of Ukrainian refugees with 1,575,703 people entering the country since the February 24 invasion, according to the UNHCR.

Polish border guards said yesterday that 1,596,000 people had arrived from Ukraine since the start of the war.

A second wave of refugee arrivals appears to be slowly ebbing. On Friday, their number was 76,200, down 12.5% ​​from the previous day.

Tens of thousands of people are also entering Ukraine from Poland – mostly people returning to fight, but also others looking to care for elderly relatives or returning to bring family to Poland.

Before the crisis, around 1.5 million Ukrainians lived in Poland, with the vast majority working in the EU country.

Hungary hosts 235,576 refugees so far, according to UNHCR figures on Friday.

It has five border posts with Ukraine and several border towns such as Zahony where local authorities have transformed public buildings into emergency centers for refugees.

By Thursday, 106,000 Ukrainians had sought refuge in Russia.

The UN refugee agency said 96,000 people passed through the pro-Russian regions of Donetsk and Luhansk between February 18 and 23. Many Ukrainians fleeing their country transit through Moldova, a small nation of 2.6 million inhabitants and one of the poorest in Europe, to continue on to Romania or Hungary.

The UNHCR did not update its statistics for Romania, but 85,000 refugees had been registered in the country as of March 8. Many refugees travel to other countries from Romania.

Romanian authorities said on Friday that 365,000 people had entered the country since February 24 and just over 280,000 had left.

UNHCR said around 304,000 people have traveled to other European countries.